Our dinner at Burt and Max’s was remarkable. We were greeted with open arms and such warmth from all of the staff members. The ambience really set the mood. The soft lighting, soothing vibe, and eclectic designs really enhanced the dining experience. We ordered the lychee pear spritzer, the chile pepper mule, and the Moscow mule for our first round of cocktails. I adored my spritzer (which was more like a martini). It was stiff and sweet. The chile pepper mule had more of a subdued taste than what was expected. My second cocktail was their mojito on the specialty drink menu. I could tell the mint and lime were freshly pressed. I was more than satisfied with my drinks!

The head chef came over and introduced himself, explaining a little bit of his background; in and out of the kitchen. He was such a chill dude and truly knowledgable in the field. It was shocking to find out that he was born in Thailand and that his first language was Thai. I’m sure this upbringing really attributes to the Asian influences in some of his dishes.

After describing the changes in the menu, the crowd favorites, and the suggested pairings, the group of bloggers I was with decided on some family style appetizers. We ordered the ultimate cheeseburger sliders, the French onion soup dumplings, the short rib blue cheese pizza, the chile garlic mussels, and the local burrata with heirloom tomatoes. There are no words to describe how fresh the burrata actually was. It just melted in our mouths and left us “MMMMing” with every bite. The balsamic glaze, Hawaiian sea salt, chiffonade basil, and California olive oil added intense flavor to the cheese. We really made sure to savor every ounce of flavor with that dish. My other favorites were the fresh onion soup dumplings and the cheeseburger sliders. The dumplings were so incredibly unique. They arrived in a plate/bowl suitable for escargot and/or deviled eggs. It was so interesting. The dumplings, themselves, were deep fried and placed in a little pool of French onion soup. Cheese was melted around it. The flavor was so bold and I found myself wondering why it didn’t come with a spoon so we could drink the rest of the soup that was stuck in the little crevices. As for the cheeseburger sliders, they were cooked to perfection. It is not often you order sliders and the temperature of the meat is medium. Most of the time, the burgers are well done hockey pucks. The three nice sized mini burgers came topped with aged white cheddar, smoked Gouda, sweet pickled red cabbage, and sriracha mayo. The flavors were so complementary with the juiciness of the beef.

For the next course, the five of us decided to share the BBQ St. Louis ribs from the new menu, the crab cakes that were recently perfected, and the deliciously consistent chicken and waffles. Somehow, this was our first time trying chicken and waffles and it was delectable! With all of the flavor combinations that we throw together, we would have never imagined buffalo sauce and maple syrup to pair so well with fried chicken and buttermilk waffles! Furthermore, the crab cake might have been the best one I’ve ever had! I’m picky when it comes to the over abundance of fish taste and I also don’t love the fresh crab to be diluted with veggies, bread crumbs, mayonnaise and other miscellaneous fillers. The chef mentioned something in the way that the crab was now handled, that was different than before. Whatever they’re doing to it now is perfect! Rice and spinach accompanied the cakes. I wonder what it would have been like with other sides, as well. I honestly didn’t need the rice or spinach; just the crab cake with the lemon mayo and lemon juice squeezed atop of it! Lastly, the BBQ ribs were tender and full of flavor. I loved the way the steak fries were stacked meticulously like wooden logs. All of that sat on a piece of wood. The presentation was beautiful.

Just when we were about to roll out of the place, the server brought over the dessert menu. Amongst the five of us, we ordered three different desserts. They had a massive carrot cake cupcake, which was so incredibly innovative, moist, and could feed your entire family. The mud cake was surprisingly not overly sweet, which was great! When you look at a thick log of coffee ice cream covered in chocolate and peanut butter chips, you expect it to be really rich and overpowering. The flavors were subtle and so enjoyable. If only we had appetites to finish it! Also, the creme brûlée pie slice was fantastic! I don’t even like creme brûlée. I didn’t think it brought anything to the table, as far as texture or taste. However, this time it was very impressive and I now have a different opinion on this popular dessert.

We were so glad that we found the time on our long, busy weekend in South Florida to make it over to Burt and Max’s. Everything was just exquisite and we can’t wait to dine there again in the future.

Be sure to check out this place on Atlantic Ave in the Delray Marketplace and let the Gastronaut Girls know what you decide to try! 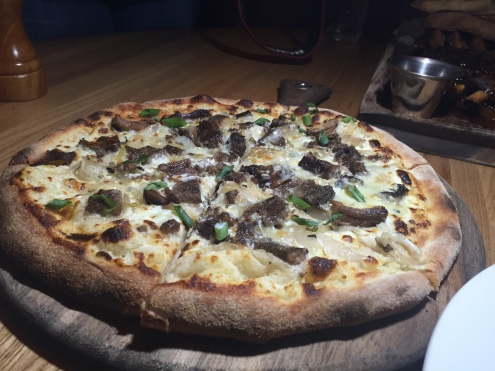 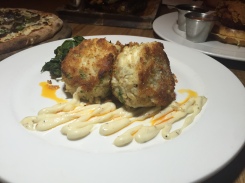 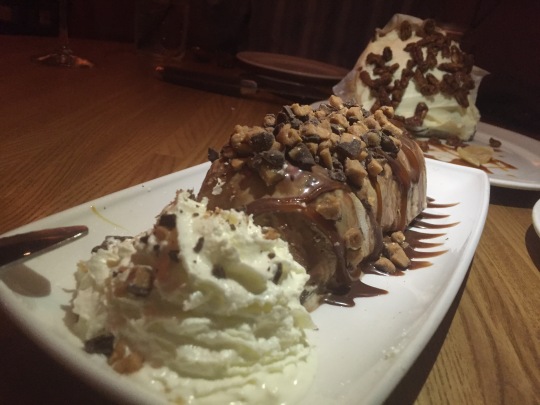